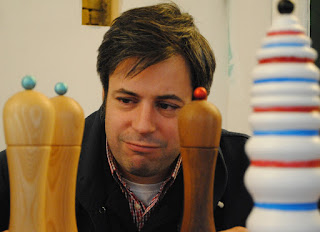 
No Grind for Thomas!


It is the familiar sights which make up the popular images of the cities which we know; but, it is in the back streets where the magic of urban character is to be found, and, it was whilst making my way along Vienna’s Westbahnstrasse that I discovered Wauwau, a small shop specializing in the advancement of very good taste! And Thomas Kreuz, the owner of this very unusual establishment, does more than just own!
Wauwau is all about pepper-mills. Not the industrial kind that all of us are used to, but superb hand crafted pieces, and all carefully and expertly made by Thomas Kreuz in his work-shop. He has all shapes and sizes; big ones, small ones, plain classical ones, and colourful ones, too. And his functional practical works of fine art are as varied and as interesting as he is himself.
It was as a student of applied arts in Vienna, that Thomas, a former goldsmith, discovered his present way in life. He hit upon the idea of making pepper-mills whilst preparing for a project as part of his studies, and, with his well practiced eye, he was able to design and produce items of sheer unique beauty. But, as he says, it is the wood that gives them that “very special something”.
And working with wood is a challenge. Because, unlike gold, you only have one chance to succeed. Gold, after all, can be melted down again and again, wood can’t. And pepper-mills, unlike jewellery, play a very big and very permanent role in everyone’s life.
We all like good food! And pepper is a question of taste, and everyone’s table demands not only a salt-cellar but a pepper-mill, as well. And, it is thanks to Thomas, that we now have the chance of providing our tables with a beautiful one-off centre piece of rare and functional art.
But, the life of this craftsman isn’t only the grind of hard work. He is the father of two very fine children, a boy and a girl; and his wife, Ursula, is an artist as well. She is a sculptor of stone, and some of her work can also be seen in Wauwau.
Stone, wood, and taste! Three very important elements (plus a little more!) and all in one little shop, Wauwau.
Wow!

Hermina Diwald was 13 years old at the end of the Second War. The fighting had stopped and people were heading for home. Living was begin... 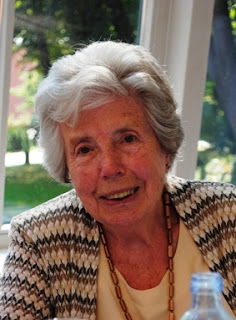